Many people search online every day for a way to make a living using the internet. Some have a great idea that they will turn into millions, some want to create a small extra monthly income to relieve a financial pressure; and there are people at every level in between. What’s the difference between an entrepreneur vs.an employee and does it really make any difference if you want to start a career online?

There are nearly 170,000 searches of the term “make money online” each month in Google alone and that does not include Bing, Yahoo or the upcoming search engines such as YouTube. So if you are looking for an alternative income, then you can definitely find what you are looking for.

What is driving this desire for an alternative income?

I would suggest that the current world political and economic climate has ignited a desire in many people for more autonomy over their own life. There is a mini revolution occurring and it is happening around us, right here, right now.

In the late 1700s, the world underwent a profound change with the advent of the industrial revolution. Machines began to replace manual labourers in the fields and cottage industries forcing many to gravitate towards the burgeoning towns to seek employment in factories. The demographic of the general labour force in Northern Europe was forever altered during the first world war when women took over many of the roles traditionally reserved for men.

In the late 1980s, the advent of the personal computer and world wide web placed a nail in the coffin of many traditional ways of conducting business. In recent times we have seen the collapse of industry giants such as ToysRUs, Maplin and HMV, with many industry experts citing the rise of new technologies and changes in our buying habits as significant reasons contributing to their collapse.

It is clear that the world is changing and many people are looking to the internet to change their lives. 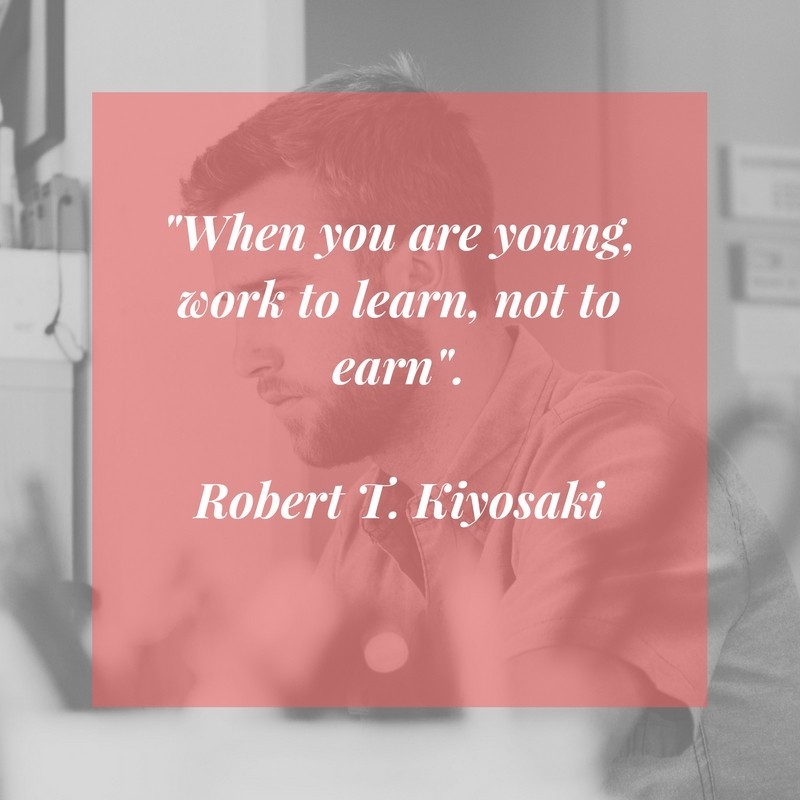 Robert Kiyosaki in his book Rich Dad, Poor Dad talks about the education he received regarding money and careers from his own day (the ‘poor’ dad) and his friend’s father whom he nicknamed the ‘rich’ dad. One was an entrepreneur and one was an employee and they both had a different mindset that kept them firmly within their chosen niche.

The ‘rich’ dad advised Robert to work to ‘learn’ rather than ‘work to earn’ whilst he was young and showed him the of having an entrepreneur’s mindset rather than that of an employee. As Robert grew older, he realised that his future lay as an entrepreneur, who sought assets with which to grow his wealth, rather than a steady income with which to buy liabilities (cars, technology, clothes etc).

He recognised the difference between trading his time for money, and having his money work for him.

One of the main ideas that he talks about is the difference between being and employee, and employer and an investor. This is best explained by looking at the CASHFLOW QUADRANT. 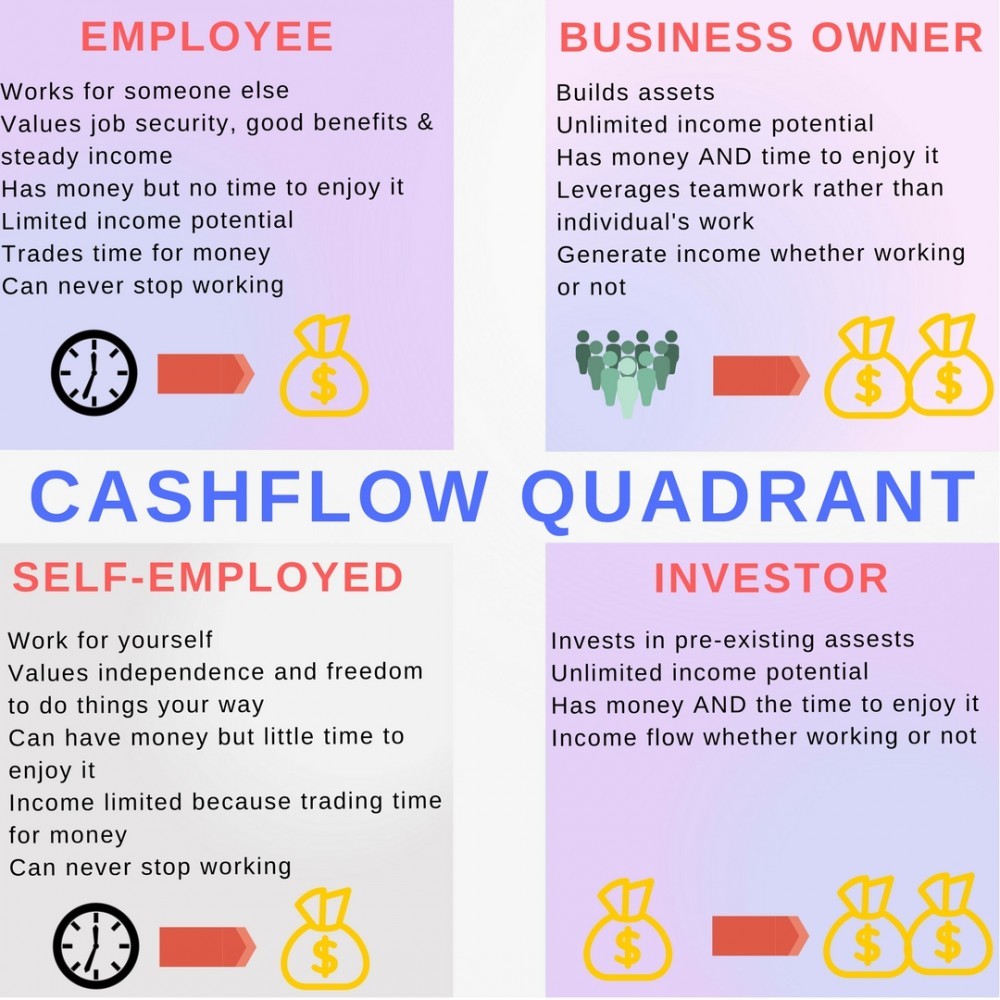 The people on the left are the employees and self-employed who are trading their time for money.

The people on the right are the employers and the investors who have found a way to generate income that it not based on the time they put in. A word of caution here: This is not to say that employers and investors do not work or that it takes not time to establish this type of income stream, because it does. Often setting up a business is very time-consuming and takes a lot of effort. They are often working far more than their employees at the start of their business. But what these people get in return, is the opportunity to get to a place where they can stop or reduce working personally, because their income is not solely dependent on the time they put in.

So if you are still and employee or self-employed, you are still trading your time for money. It you stop working, your income stops, full stop!

This difference becomes even more important when you look at the distribution of wealth and population according to this these quadrants. 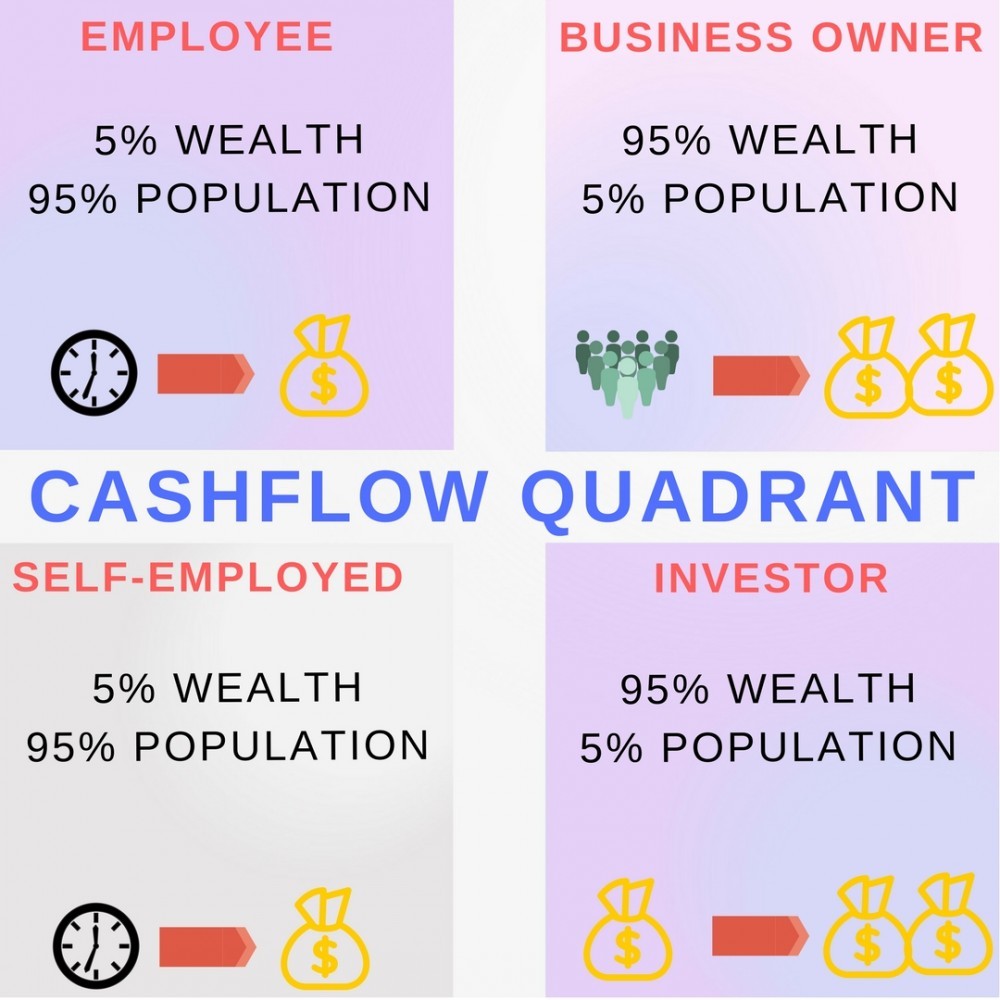 What we now have is clearly an unequal split between the wealth and the population.

This is not a political or an argument for a socialist revolution and redistribution of wealth; it is just an observation that most of the money and the time to enjoy it, sits with those willing to take a risk, invest in pre-existing assets or by starting a business of their own.

If you are looking to be an online entrepreneur, or an entrepreneur of any kind, then you need to change your mentality that keeps you tied to a job, trading your time for money. Yes, there is a risk because to become and entrepreneur you need to temporarily let go of your security in order to build your business, but the benefits far outweigh the risks in my book.

There is nothing wrong with wanting to have a secure job and earn your income that way. Most of the population do this. And you can still make an income online whilst still being an employee or self-employed. But if you are looking for something different and want to make a career online as an entrepreneur or business owner, then it would be a good idea to understand which mindset you currently have so that you can match your search with what you will feel comfortable with.

If you have not read Robert Kiyosaki’s book, and you are looking to earn money or increase your income from ANY source, then I strongly urge and advise you to buy a copy and read it as soon as you can. It costs less than £5 and is full of useful and practical advice that will help you shift into a different gear when it comes to thinking about money, earning it and better still, having money work for you.

10 traits of an online entrepreneur mindset

How to start an online business for free: the Wealthy Affiliate way 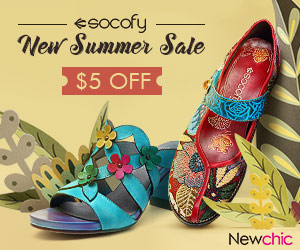